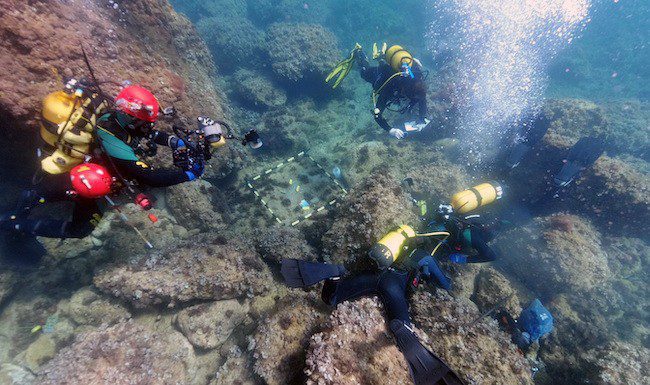 A total of 53 perfectly preserved Roman gold coins have been found on the seabed off the Spanish island of Portitxol east of Valencia, following the chance discovery by two recreational freedivers of an initial eight.

The find by Luis Lens and Cesar Gimeno triggered an underwater excavation led by archaeologists from the University of Alicante, who say that what they found represents one of the biggest hoards of such coins ever to be found in Europe.

Diving alongside the archaeologists were members of the Spanish Civil Guard Special Underwater Brigade. Besides the coins, the scuba divers found three nails, thought to be copper, and severely deteriorated lead remains that could have come from a sea chest.

The coins have been dated to the late Roman period, between the end of the 4th and beginning of the 5th century AD, by scientists from the university’s Research Institute in Archaeology & Historical Heritage.

The coins were so well preserved that their inscriptions were clear to read. They derive from the periods of government of five emperors: Valentinian I (three coins), Valentinian II (seven), Theodosius I (15), Arcadius (17) and Honorius (10). Only one coin had an indecipherable inscription.

Ancient history professor Jaime Molina from the university led the team and described the haul as an “exceptional archaeological and historical find”.

It is thought possible that the coins were intentionally hidden to protect them from invading barbarians. From 409AD the western Roman Empire’s collapse was beginning as peoples such as the Alans, Vandals and Suevi advanced and looted across the Iberian peninsula.

The coins are to be restored for exhibition in the Soler Blasco Archaeological & Ethnographic Museum in Xabia, and the Valencian government has allocated funds to continue underwater excavations in the area. Previous finds there have included anchors, amphoras and ceramics from different periods.

Meanwhile a shipwreck off an ancient Roman port near the town of Sitia in Crete has been excavated by underwater archaeologists under the supervision of Greece’s Ephorate of Underwater Antiquities.

The underwater research in the Gulf of Paleokastro revealed mainly intact 2nd century AD amphoras, lying on the seabed as they would have been loaded on the ship. From their design the vessel is thought to have been trading from the Iberian peninsula.

The diving investigation was carried out in collaboration with the University of Toronto and the British School of Athens, as researchers try to learn more about the port. Remains of ancient buildings and storage vessels called pithos from the Minoan civilisation of around 3000 BC were also found, as well as structures from Roman times.