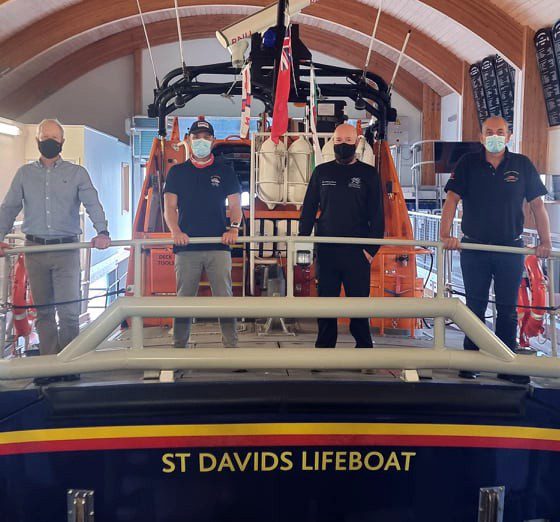 Pembrokeshire RNLI lifeboat crews are to receive a special commendation for saving the lives of two scuba divers in challenging circumstances during the winter.

The incident was reported last year on Divernet. The man and woman had been swept away from the rest of their group during a dive off Martin’s Haven late in the afternoon of 14 November.

Pandemic lockdown restrictions had only recently been relaxed in Wales, though the emergency services had issued pleas for divers to exercise caution. Three lifeboats, the Coastguard helicopter and rescue teams, police and two nearby tankers were caught up in the search.

The lifeboats launched on a high spring tide just before 5pm, with the light and sea conditions deteriorating rapidly. The Little Haven inshore lifeboat in particular was said by the RNLI to be operating “at the edge of its capability”.

After an hour of searching in the darkness, volunteer Thomas Kirby on the St Davids all-weather lifeboat spotted the two divers in a searchlight beam off Skomer Island, 1.5 miles from their original position. Recovering the pair was hampered because one of them was entangled in their SMB line.

The Little Haven inshore lifeboat delivered the divers uninjured to the Coastguard rescue team at Martin’s Haven. The Angle and St Davids all-weather lifeboats then had to assist that boat back to shore, because the sea conditions were by then so bad that an alternative recovery site was required.

Now the lifeboat crews from Angle, Little and Broad Haven and St Davids are to receive a letter of commendation from RNLI Chairman Stuart Popham, with a formal letter of thanks being sent to the Coastguard for its co-ordination of the rescue.

“Thanks to the professionalism of HM Coastguard and RNLI volunteer lifeboat crews, the two divers were located in time to save their lives,” commented  RNLI Area Lifesaving Manager Roger Smith. “I am so proud of the selflessness and determination shown by all involved, and this recognition is very well-deserved.”

The RNLI provides a 24-hour search and rescue service around the UK and Ireland and operates more than 238 lifeboat stations and 240 lifeguard units. Since the organisation was founded in 1824, its volunteers are said to have saved more than 142,700 lives.