Guns in the gully

Guns in the gully

We last heard from BEN DUNSTAN when he shared his diving experiences exploring Cornwall’s flooded mines, but that’s just what he does when the sea is inhospitable. When conditions allow he looks for shipwrecks, and with the 150-years-lost Boyne he struck lucky recently 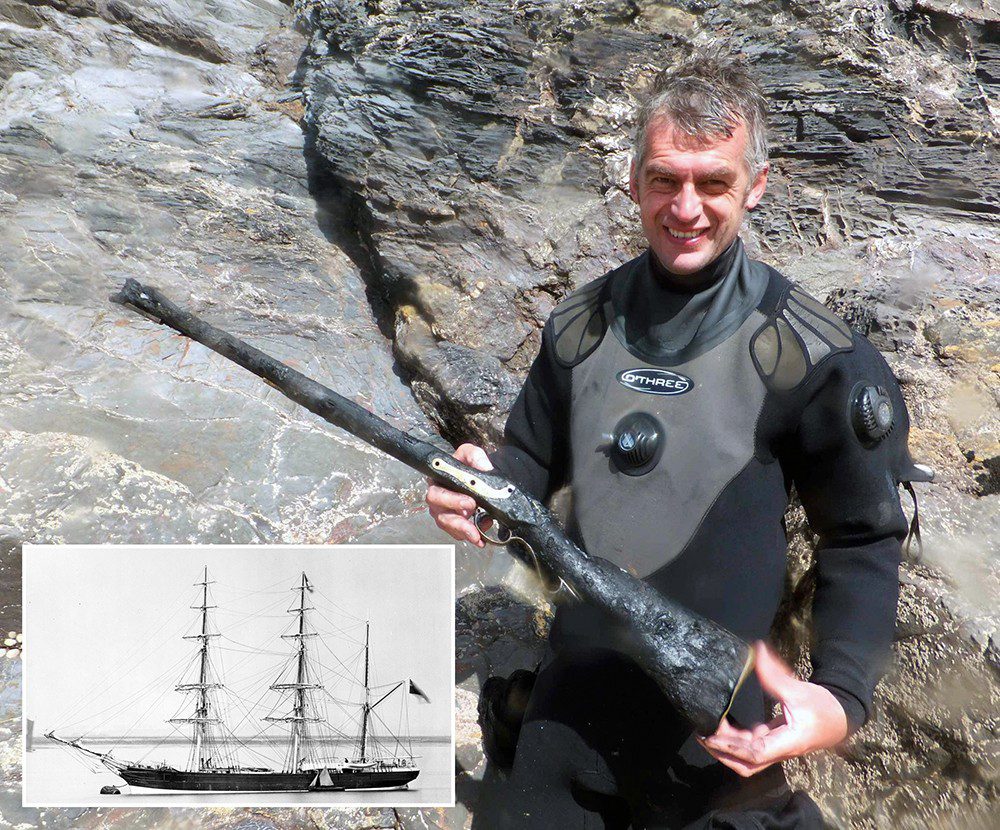 Ben Dunstan with a musket found on the wreck of the Boyne. It took four hours’ careful work to remove from the concretion.
Inset: The Boyne’s sister-ship Palestine.

One of the main things that initially got me interested in diving was the appeal of shipwrecks. The stretch of coastline off Falmouth in Cornwall has no shortage of wreck-sites, but it wasn’t long before my buddies and I had dived all the known sites from the charter-boats and started looking for other sites that had yet to be discovered.

After years of diving the same wrecks and reefs, it seemed a logical choice to get our own boat and spend what spare time we had looking for new sites to dive.

It didn’t take long before we were enjoying some success. Mostly this came in the form of well-broken steamships and sailing vessels, but many of them had never been seen since they sank.

The sites were often in shallow water and offered little shelter from the prevailing winds and swells that had reduced them to little more than anchors and piles of scattered steel and iron plate. 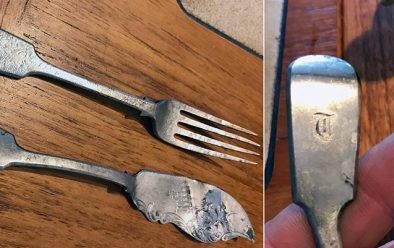 The silver fish knife and fork found on the wreck, with the letter T for Tindell on the handles.

It was while researching such wrecks that I and fellow wreck-enthusiast David Gibbins read about a local wreck called the Boyne. This 617-ton iron barque had been built by Harland & Wolff in its Belfast yard for a ship-owner called WH Tindell to carry sugar back from the colonies in the Far East.

On 2 March 1873 the vessel had been 120 days out of Batavia carrying 900 tons of sugar when, lost in fog off the Lizard, the crew made a navigational error.

Thinking that the ship had already passed Lizard Point, they started to turn north toward the safety of their intended destination, Falmouth.

High cliffs suddenly loomed ahead, and the Boyne went headlong into them, at Polurrian Cove near Mullion. In the heavy south-westerly sea it very quickly began to break apart.

Of the crew of 19, only four survived the sinking, with many of the dead washing ashore at Mullion the next day.

After reading accounts of the incident, David and I considered trying to find the location of the Boyne’s sinking and see if there was anything left of the vessel.

Back in the 1960s an incomplete brass nameplate had been recovered by a diver in the area, but exactly where it was found had been obscured over time.

The area where the wreck supposedly lay was a very shallow section of reef, right up against some high cliffs. It wasn’t the kind of place you could reach even in a small boat to be able to search with a magnetometer.

According to the Royal Cornwall Gazette report at the time “the spot where the Boyne struck is one of the most terrible in Mount’s Bay. The cliffs rise almost perpendicularly from 60 to 80 feet from the sea, and at the base lies one massive bed of clay slate rocks, rising directly from deep water.

“The tide was about flood at the time, and no sooner had she struck than she was thrown round broadside to the waves perfectly helpless.” 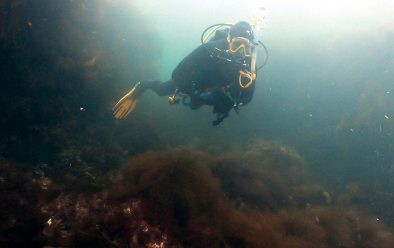 We started diving the coastline on the calmest days from a nearby beach. This earned us some puzzled looks from locals and tourists alike, because access to the beach involved quite a long walk and numerous steps down a cliff path.

But we had soon discovered the wreck site, a short distance offshore among the heavily kelp-covered gullies.

The broken remains included a few small steel and iron sections of plating jammed in the rocks, but most interesting the first time we dived the site was the discovery of a gully that seemed to hold a variety of small brass artefacts caught in the concretion of rusting iron objects. 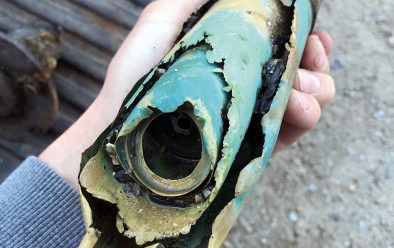 The outer layers of the brass telescope have eroded away.

We instantly recognised the remains of a brass telescope protruding from this concretion.

The inner layers of smaller brass tubes had been exposed as the instrument had been worn away in the rough conditions.

We left the items where they were initially, but then decided to try to recover what was left of them before the next set of winter storms had a chance to damage them even further.

At this point we couldn’t be certain that this was the wreck of the Boyne, because many other vessels had been lost during the same time period along the coast.

As we set to work, to our amazement some incredibly well-preserved items started to emerge. Beneath the telescope was a layer of wooden pieces and small brass items in a very eroded state. 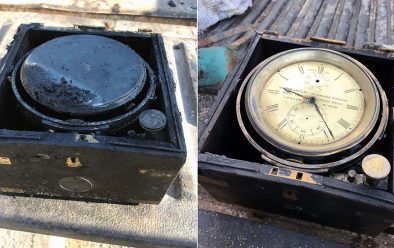 The brass instrument, as found, still in its box. Right: the cleaned-up chronometer. 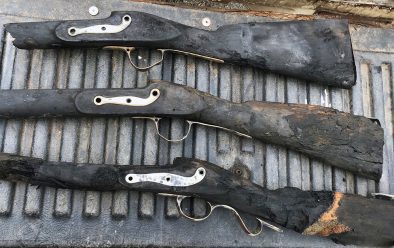 The first three muskets to emerge.

The state of preservation of these artefacts was unlike any we had ever seen on a wreck along this coast before. It seemed that by good fortune the items had come to rest in the base of that deep, steep-sided gully, and this had protected most of them from the abrasive action of the sea during the winter storms.

The silver knife and fork bore the letter T, representing Tindell. This, along with a single coin of the right date and the chronometer, provided a very good likelihood of the wreck being the Boyne.

Further research in the archives would uncover a document that referred to the ship’s crew having been armed for their journey to the Far East, including the loading on board the ship of several muskets – just like the ones we had recovered. We hadn’t realised it but the gully seemed to contain the only real selection of preserved items from the wreck of the Boyne.

There are other gullies around it, but they were more exposed to the south-west swell that smashes into this reef for nine months of the year.

So all that was left among the more mobile boulders and stones were tiny fragments of destroyed brass and china.

We returned whenever the weather allowed, and eventually were able to fully exacavate the gully down to bedrock.

Jammed right in the base was a final fourth musket, perfectly preserved with an intact stock and all its brass furniture remaining in situ. This gun alone took four painstaking hours’ work to remove. 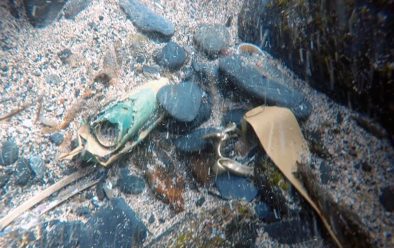 The sight of artefacts that originally drew the divers to the gully.

All the recovered items have been reported to the Maritime & Coastguard Agency’s Receiver of Wreck as per UK salvage law.

They are currently undergoing preservation and we hope they will go on display somewhere locally so that the public can be reminded of such long-lost wrecks and the fate of the crews who travelled in those dangerous times.

• You can see a video of Ben Dunstan with his Boyne finds here.